Erin Akey spent most of her life overweight.  She grew up in a traditional New Orleans family where love was expressed through cooking and eating big family meals.  You never wasted or left food on your plate uneaten.   Not having seconds was almost an insult to the cook.    Learning to be a great cook came from that family, but also brought with it some bad eating habits that could have lasted a lifetime.

As a teenager, her weight issues got worse as did her self-esteem.  By the time she was 30 years old, Erin was the mother of three boys and was also morbidly obese.  With the birth of each child, Erin added more weight to her six- foot- tall frame and also added more stress to her inactive body.

An activity as simple as a walk around the block would leave her breathless.  Her job involved climbing multiple flights of stairs and, much to her embarrassment, Erin would have to stop mid-flight every time.

In 2005, Erin’s life changed dramatically when she lost everything in Hurricane Katrina. At that time she resided in Bay St. Louis, MS and has written a book, After the Rain, detailing her experiences. Erin and her boys found a renewed chance at life when she transferred to Mobile, AL and met and married her husband Ben.

One thing was still missing in her life – control over her weight.  Erin decided she owed it to herself and her family to address this issue.  She had tried every known diet and could always lose 30-40 pounds, only to regain the weight and then some.  Every failed attempt at weight loss left Erin feeling like a failure.

In the fall of 2008, after much research and discussion with her primary care physician, she and her husband made the decision for Erin to have gastric bypass surgery.  On January 14, 2009, her new life began.  Four hours after surgery, Erin got up and began walking in the hospital halls and never looked back.  She read everything she could get her hands on and was determined to make the most of this gift.  As soon as she was released by her surgeon, six weeks later, Erin began working out five times per week.

After losing more than 125 pounds, Erin set out on a mission.  She decided to become a runner.  One of her friends persuaded her to join a running group and, after a few weeks, she knew she loved the sport.

Within three months, Erin did her first 5K with her husband by her side.  They then decided to train for a half-marathon; and in January of 2011, Ben and Erin Akey completed the Walt Disney World Half-Marathon.  This brought Erin full-circle in her journey and solidified her desire to work with others and help them achieve their dreams and also to work in fighting the disease of obesity.

Erin became a Certified Personal Trainer, Fitness Nutrition Coach, and Water Fitness Instructor.  Erin returned to school at The University of Alabama to pursue a degree in Food and Nutrition in order to become a Registered Dietitian.  Health and fitness had become her passion and helping fight the disease of obesity was a mission and a ministry.  Erin’s radio show was born from this passion.

In 2012 Erin broke her back and had to have spinal fusion in 2013.  She gained back 40 pounds of what she had lost and was upset with herself.  Erin could no longer run and having to take steroids had her appetite raging out of control.  Thanks to a good friend who was a nurse and bariatric coordinator, Erin  found a new tool, Plexus Slim, to help her lose the cravings and get her appetite under control.  She was able to get that 40 pounds off plus another 18 so far! 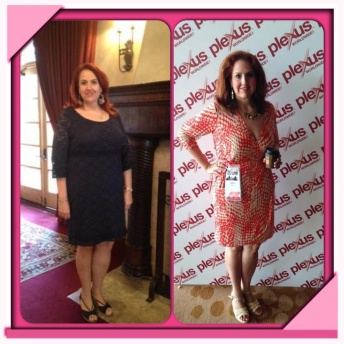 Regain after weight loss surgery is an all too common part of life for bariatric patients and so Erin knew she was not alone.  Erin loves working with both bariatric and non-bariatric clients using this tool of Plexus to help them make better choices and get themselves to a healthier place.

Erin has never felt better and is determined to spend her life fighting the disease of obesity, along with her husband Ben, through their programs.

Erin believes that through hard work and dedication, and with the right tools, all of us can achieve success and health and accomplish physical activity they desire.  For some, the goal may simply be to exercise regularly for life.  Anything is possible and Erin wants to help others become as healthy as they can be and maintain this for life.

Erin is the founder of an online healthy living program that allows her to work with clients from all over the country at no charge to them  via her free app in the iTunes store called COOK EAT LIVE SMART as well as the host of a weekly radio show called “Fit Living with Erin Akey” on 106.5 FM.  The show airs on Sundays  at 7pm central time and is also streamed live on the station’s website, www.fmtalk1065.com .

Erin and Ben founded a 23 city tour in 2014 called The Winning Against Obesity Challenge and are excited to share these events across the country with anyone struggling with weight or just looking to get healthy!  They also developed a program called COOK, EAT, LIVE, Smart which is done for small groups and businesses to promote health and wellness with God at center of all!

Erin is the author of After the Rain, as well as the soon-to-be-released Finding Your Marathon Moment.  She lives in Mobile, AL with her husband Ben and their children.

6 Responses to About Erin…….